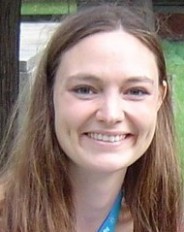 Senja Barthel, formerly a post-doc in the group of NCCR MARVEL co-director Berend Smit, has recently been named assistant professor at the Vrije Universiteit Amsterdam. Her experience at MARVEL gave her a solid basis in initiating and managing projects with people working on a range of scientific subjects, allowing her to develop what is needed for truly collaborative research.

Senja studied math and physics at TU Berlin and received her PhD in geometric topology from Imperial College London. During this time, she started collaborating with chemists. She discovered the appeal of mathematical modelling of scientific questions using geometric and topological approaches, as well as working on the purely mathematical questions that arise from these interactions. Since then, she has liked to blur the boundaries of different disciplines.

She started a post-doc in Berend Smit’s Laboratory of Molecular Simulation at EPFL where she got involved in a number of collaborative projects with colleagues in her own lab—chemists, chemical engineers, mechanical engineers, and physicists—as well as with other MARVEL labs including the Theory and Simulation of Materials, run by MARVEL director Nicola Marzari and the Laboratory of Computational Molecular Design, run by Clémence Corminboeuf.

“It has been a time of real apprenticeship. For me materials science is a huge playground with geometry shape questions everywhere.” she said. “ And a network like MARVEL—with open-minded PIs and much possible interaction—is the perfect environment for bringing different viewpoints, approaches, and methods together.”

The new position in Amsterdam will move her back into a mathematics department, where, she says, she feels she nonetheless belongs. Though she will revive her initial focus on geometric topology, she will also continue building bridges to other departments.