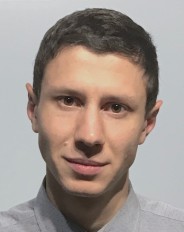 Michele Simoncelli comes from Rovereto, a small town surrounded by mountains in the North-Eastern Italy, near Lake Garda. He attended a science-oriented high school before studying physics. His studies in physics started at University of Trento, where he earned a Bachelor of Science, and then continued with the international master program on the “Physics of Complex Systems”, a double-degree program limited to 20 students and involving Politecnico di Torino, École normale supérieure de Paris-Saclay and Sorbonne Université in Paris, the International School for Advanced Studies (SISSA) and the Abdus Salam Centre for Theoretical Physics (ICTP) in Trieste. He was a PhD student at EPFL, working on the quantum theory of heat transport, under the supervision of Professor Nicola Marzari. He got his PhD in May 2021. Michele was awarded the 2020 Chorafas Foundation Award at EPFL for his work on heat transfer. Now he is postdoc at the University of Cambridge, UK. In his free time, Michele enjoys outdoor sports like running, skiing, climbing, and alpinism.

Michele, please tell me a bit about your background. Have you always been interested in science?

Yes, I have. This is why I opted for a science-oriented high school, where I started studying math, physics and chemistry. In that high school I also had the chance to study electronics and telecommunications. I liked these subjects and in the final year I did a project on this theme: with a friend, I designed the electronic circuits and developed the software to control a “CNC milling machine”, a machine that can sculpt 3D objects starting from a block of plastic or wood. The novelty of this project consisted in the capability to offer a very simple way to design and produce artistical sculptures with the precision of a computer-controlled machine (i.e. around the micrometre).

With this project, we attended the European Union Context for Young Scientists (EUCYS), winning the qualification to the “Intel International Science and Engineering Fair” (Intel ISEF), the biggest science and engineering fair in the world for people under 21. We met a lot of scientists and few Nobel prize winners there… that experience gave me an idea about how working in research would be like and motivated me to pursue a scientific career.

How did you wind up at THEOS/ MARVEL?

I had my first experience with combining physics and computational science to solve a problem about non-linear waves in water during my bachelor’s thesis. Another thing that played a part in the direction of my future was the master’s thesis I did on the molecular mechanisms that allow to produce energy from salinity differences between fresh and salty water using supercapacitors. I was interested in this because it was combining basic science (the microscopic behaviour of the salt ions inside a supercapacitor) and at the same time technological applications, since understanding the microscopic molecular mechanisms at play was key to maximize the amount of energy produced. I had always been interested in the theory, but in applications as well, therefore I have always been looking for projects which are challenging from the basic-science point of view, in the sense that they need to develop new theory, and at the same time have the potential to contribute to technological progress.

During my master thesis in Paris I started looking around in Europe for a PhD and I had the chance to speak with Prof. Nicola Marzari. At the time of our discussion, Prof. Marzari had just published a breakthrough result, together with his PhD student Andrea Cepellotti, concerning the theory of thermal transport in crystals [Cepellotti and Marzari, “Thermal Transport in Crystals as a Kinetic Theory of Relaxons”, Physical Review X 6, 041013 (2016)], and offered me a PhD position in his group to explore further the novel “hydrodynamic thermal transport phenomena in solids” exposed by this novel theoretical framework. The project was extremely interesting to me, and most importantly I thought that my background was quite suitable to work on that. Indeed, it would have involved quantum statistical physics, which had been the focus of my master, fluid dynamics and computational physics, subjects on which I had already worked on. Finally, the project had the potential to be an exciting mix of fundamental science (e.g. the development of novel equations to predict or explain unknown phenomena) and direct technological applications (e.g. the usage of the newly developed theory to design next-generation electronic devices). I signed my PhD contract in a very positive mood.

How did the work go?

I started my PhD studying the phonon Boltzmann equation for heat conduction in crystals, and the aforementioned “kinetic theory of relaxons” formulated by Dr. Cepellotti and Prof. Marzari [Physical Review X 6, 041013 (2016)], especially focusing on understanding the role played by parity within this theory. In particular, Dr. Cepellotti and Prof. Marzari had shown that heat in crystals is carried by relaxons, collective excitation of atomic vibration that have an odd or even parity like integer numbers (for the mathematically inclined, relaxons are eigenvectors of the scattering operator appearing in the linearized phonon Boltzmann equation), and only odd-parity relaxons determine the thermal conductivity. My initial task was to understand the role of relaxons having even parity, and after doing some math it turned out that even-parity relaxons determine the thermal viscosity, a parameter that enters into the description of heat transport playing a role complementary to that of the thermal conductivity, and is especially relevant in the “hydrodynamic regime”, where heat transfer resembles fluid dynamics. This discovery came right before the publication in Science [Hubermann et al., Science 364, 375 (2019)] of the measurement of hydrodynamic heat transport phenomena in graphite, and it turned out that our formulation was capable of explaining from a theoretical point of view these novel experimental measurements.

Another key moment for my PhD was a discussion I had with Prof. Nicola Marzari and Prof. Francesco Mauri about the possibility to develop an equation capable of describing heat conduction not only in crystals (to which the phonon Boltzmann equation is limited) but also in complex or disordered materials (such as complex thermoelectrics and glasses).

This is how I started working on the project that led to the development of the “Unified theory of thermal transport in crystals and glasses” [Simoncelli, Marzari, and Mauri, Nature Physics 15, 809 (2019)], a unified equation that has shown the emergence of the quantum wave-particle duality in thermal transport with the coexistence of particle-like and wave-like heat-conduction mechanisms. Concerning technological applications, this unified equation will potentially have a relevant impact in the field of renewable-energy research, since its solution sheds light on how to optimize the efficiency of thermoelectric conversion of waste heat into electricity.

What’s the biggest challenge in pursuing a scientific career?

Balancing risks and returns and handling a non-linear progress.

By “balancing risks and returns,” I mean that one has to tackle problems which are relevant enough for the overall scientific progress, and at the same time are solvable (preferably within a not-too-long time).

As to the non-linear progress, working in science surely brings significant excitement when a research problem is solved and something is discovered, but these experiences are exceptional “Eureka” moments rather than everyday situations.

In practice, a discovery is often the result of learning from a number of failures or partially working attempts. When things are not fully working, it can be challenging to stay motivated and to believe that the process of continually learning from unsuccessful attempts will eventually lead to the ultimate goal of discovering something.

On the other hand, the more difficult a problem is, the more rewarding is finding a solution for it. Therefore, all these challenges can potentially turn into a reward as soon as the problem will be ultimately solved.

What I am aiming at is to do something that can contribute to the progress of our society, and this is what motivates my scientific activity. Even though I am far from this goal, I think that it is essential in its role of ideal: indeed, one cannot achieve any result without a dream to get fulfilled.

Obviously, being a scientist is not the only way to reach such a goal. Should I try to figure myself out differently, I would aim at contributing to the technological progress as an entrepreneur.

What are your top two papers?