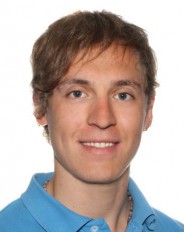 Leonid Kahle was born in Karlsruhe, Germany, but grew up mostly in Munich and partially in Rhodes, Greece. After doing his mandatory military service as a mountain ranger in southern Germany, he completed his bachelor’s degree in Kiel before switching to EPFL to complete a master’s degree. He did an internship in Cambridge, Massachusetts, working for Bosch, but returned to Lausanne to start his PhD with Nicola Marzari. He was involved in the MARVEL Incubator 1 project and defended his thesis successfully last year. After a short stay as a researcher in the group, he moved on to start a postdoc at IBM Research in September.

I was always interested in science, but in high school I opted for a mixed curriculum, studying sciences, but also German, English, Greek, French and Spanish.

How did you wind up at EPFL and THEOS?

I wanted to explore countries other than Germany and applied to several international universities after my Bachelor’s, among them EPFL, which I had not heard of before, to be honest. A colleague in Kiel, in the group where I did my bachelor’s thesis, told me about this cool school called EPFL. Its Wikipedia entry looked super promising, as did the one for Lausanne. It’s not one of these stories where, as a young kid, I always wanted to be at EPFL. How I got there was a bit random, but I have been very happy with my choice ever since.

l always had in mind that I wanted to do something more theoretical and skip the experimental work. As I was browsing through the projects that I could do as a master’s student, I found THEOS’ projects particularly interesting, especially a project on Koopmans compliant functionals. I was quite intimidated because at first I didn’t even understand the title, but I said okay, I’ll just give it a shot and apply. If I’m too stupid, they’ll tell me, so there’s nothing to lose except my pride. The postdocs as well as Nicola Marzari took really good care of me and I really started to enjoy working on materials simulation. I also did a second project  and then went to Cambridge for an internship, working on the simulation of battery materials. With the feeling of not having explored Lausanne to its full potential, I asked Nicola if he would take me as a PhD student and he immediately said yes and offered me a couple of subjects. I chose to work on the simulation of diffusion properties.

What is the best thing about working with THEOS?

My former colleagues. I have yet to hear about another group that has such nice and interesting people. There was very good cohesion, diversity of character and a very nice social life. The other thing I most appreciated was the trust of Nicola in his people, he let people roam free and explore their own ideas. He’s of course there if you need him but he also allows for people to make their own mistakes, which he forgives easily because he sees it as part of the training that people have to go through.

What are you doing now?

I’m working at IBM Research in Zurich, on a topic that is not that close to what I was working on before, namely the field of machine learning. I work on natural language processing, basically studying how machines can understand and learn from text. Things are more fluid here at IBM, compared to the PhD, which means that what I’m working on will change regularly.

How did you wind up at IBM?

Within MARVEL, I was working on a project with IBM on battery electrolytes and so I had the pleasure of getting to know the group there.  I also visited IBM a couple of times thanks to that collaboration, and applying there came to my mind when I was looking for new opportunities. I knew what I was going for in terms of social life and working conditions. The only uncertainty was the complete change in topic, but again, I just took the same approach as with my master’s project. I figured I would just apply and they’ll let me know if they think I’m good enough. Luckily I convinced them.

In the near future, I would like to stay in this transitional zone between academia and industry, which is what IBM Research is. There is plenty of research to do, we are encouraged to learn continuously and lead discoveries, but we also talk to industry clients of IBM to deliver products, which is quite exciting. For the long term I could envision both staying in industry or going back to academia.

What’s the biggest challenge to pursuing a scientific career?

The biggest challenge, in my opinion, is that that the system has lost some of its humanity and has deviated quite a lot from the original core values of science. I have the impression that there is pretty cut-throat competition for very few positions, given how many people are flooding into this domain while the number of positions is not increasing substantially. This leads to a number of very negative side-effects, publish or perish being one, but also diluting the science since we are just less prepared to work on uncertain projects and prefer to go for the low-hanging fruit.

I cannot imagine doing anything else. I have always loved to learn and to explore new ideas, discover things and apply the scientific method. I would have to comprise a lot to enjoy something else. If I really couldn’t be a scientist I would probably have become a skiing or windsurfing instructor.

The paper I’m most proud of is my first paper which develops the “pinball model” as we called it. It dives deep into the physics, explores the relationship between electrons and ions in ionic conductors and develops approximations to make the calculation of diffusion properties much more efficient. I like it because it starts from the physics and I see that approach as being in line with work by my big heroes that developed first-principles simulations.  https://journals.aps.org/prmaterials/abstract/10.1103/PhysRevMaterials.2.065405

The second paper I’m most proud of is definitely the screening article, where we use the pinball model to search through thousands of materials to find good ionic conductors for battery applications. I like it because it combines several different fields. It has a large computational aspect, due to the thousands of calculations that needed to be done with AiiDA, a software I contributed to. There is also the physical aspect, mainly due to the pinball model and the approximations that we took. And last but not least, there is a lot of chemistry in the paper, because we explored many different material classes and this meant that I learned a lot about what it actually means for a material to be good for batteries. Also, if I may, I‘m proud because this paper was a lot of work, and it was very satisfying to see something published that I worked so hard for.  https://pubs.rsc.org/en/content/articlehtml/2020/ee/c9ee02457c

What do you do in your free time?

One of the main reasons I decided to come to and stay in Switzerland is mountaineering. In my free time I often go hiking, climbing or ski touring. Recently I also discovered bike touring and biked from Lausanne to Rome, which was a magnificent trip. We started when Italy opened up after the lockdown, we were there on the first weekend that they allowed foreigners in and we could explore South Tyrol and Venice, normally quite touristic regions, almost by ourselves. All in all, it was a really good experience to recharge the intellectual batteries. It depleted the body but charged the mind.