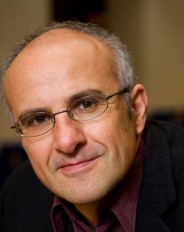 Antoine Georges is a part-time professor at the Department of Quantum Matter Physics at the University of Geneva since 2011. Within MARVEL phase I, he was a group leader in Vertical Project 1.

Antoine Georges graduated from Ecole Polytechnique in Paris in 1983 and joined Ecole Normale Supérieure. He obtained his Ph.D. in 1988 from Pierre-Gilles de Gennes.

In 1989 along with other graduates such as Phil Anderson and Daniel Fisher he became a postdoc at the Princeton University and worked there till 1991. In autumn of 1990 he along with Gabriel Kotliar joined Rutgers University where they developed today's formulation of dynamical mean field theory by mapping it onto the self-consistent solution of a quantum impurity model. He also worked with Anirvan Sengupta on kondo effects and performed theoretical work on spin glasses and quantum spin liquids along with Olivier Parcollet and Subir Sachdev

In 2003 he relocated to the Centre de Physique Théorique, a division of Ecole Polytechnique, and as of 2009 holds chairman position at the Collège de Frances' condensed matter physics. In February of the same year he became a teacher and professor at the Collège de France. In 2010 he was named Sommerfeld lecturer by the Ludwig Maximilian University and in 2011 became Schrödinger lecturer at the ETH Zurich. The same year he became a part-time professor at the University of Geneva and prior to all of it, he was a recipient of the Dargelos Prize in 2004 from his alma mater. In 2006 he was awarded the Europhysics Prize in condensed matter and next year he was honoured with a CNRS Silver medal.

Visit his webpage at Ecole Polytechnique in Paris.